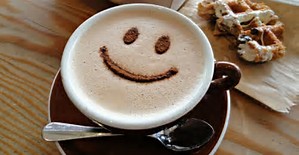 I'm currently on my second cup....and that's where I generally quit for the day.  But, you really shouldn't talk to me before cup #1.  Dangerous territory.

Romeo is off for the next 9 weeks or so ~ I think he returns the first part of August.  He has a lot to do, although he has already finished painting the spare bedroom, along with treating some of the carpet stains.  Son #2 is ~ as I lovingly describe his housekeeping skills ~ somewhat of a slob.  He has improved a lot, but he just doesn't mind living in chaos.  Romeo has a desk set up on an old fold away table, and bought a new printer (which I wanted to do 6 months ago, but he poo poo'd that idea then). I am doing my best not to resent his two month time off.  He does have testing he needs to complete in order to obtain his final license, as opposed to his provisionary one.  So, I know he will be busy.  There are a few other projects around the house that need to be done.  Still.....=sigh=.........I will have to work on it, and be happy for him.

Last night we went to a movie ~ at the movie theatre! ~ something we've not done in quite a while.  We saw Guardians of the Galaxy 2, which was entertaining, but not quite as good as the first movie.  So often the case.....but the best part was the theater.  They have recliner seating, and it was really nice to watch the movie with my feet up.  Of course, you can't choose the folks who sit next to you.  There was a man and wife sitting to my left, and although it was a bit annoying to listen to them chewing on massive amounts of popcorn (this theater has free refills), the husband seemed to have breathing problems, and was snorting, coughing, and hacking up phlegm.  Gross.   Otherwise, we will be back ~ at least in December, when the new Star Wars movie comes out.  Romeo loves Star Wars (as does my boss).

After the movie we went to Staples (to pick up previously mentioned printer) and a notebook to put all my last class notes in.  I was amazed at how large some of these notebooks are.  Over 800 pages!  I didn't go that big, but it does hold up to 650 pages.  See below...... 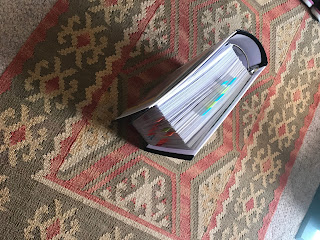 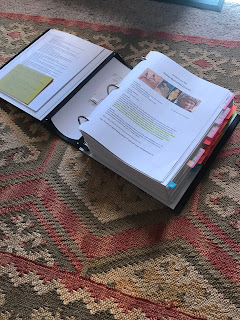 Massive.  This includes all of our readings, notes, and tests.  It will be a good reference, which is why I wanted to put it in a single notebook.

I also found a recipe on FB for Blueberry Lemon cake.  I've found a number of recipes there that turned out delicious.  This one is a keeper....not too much sugar (1 cup in the entire cake) and a pound of blueberries. 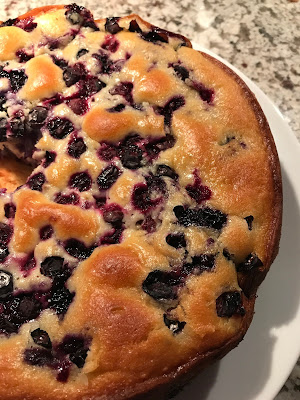 I want to leave you with this: 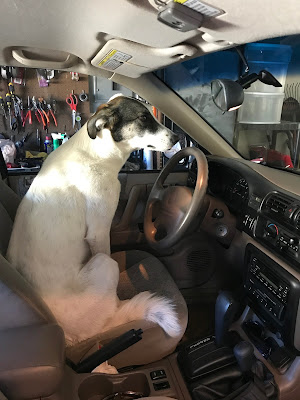 I was taking out a few groceries, and she just jumped in and made herself at home in the drivers seat. There has only been one other time she's done this.....we think she's hoping we'll take her to Texas where her owner is....Son #2.  I know he misses her, but is waiting until he gets into a house with a fenced in yard. 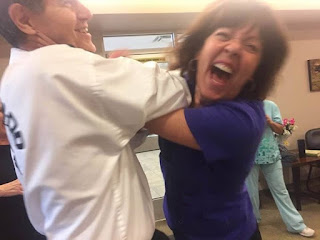 My boss (on the left) gave us a few self defense pointers.
One of our hygienists was having a bit of fun with the big guy...
His skills are amazing...but then he is a karate master.

We had a great time practicing self defense skills at our most recent staff meeting.  I wish we had meetings like this more often!  It certainly beats listening to the newest greatest toothpaste, floss, techniques, etc. 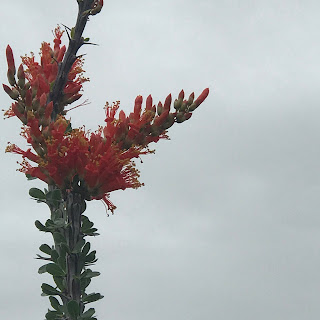 The ocotillo plant ~ looks like a bunch of sticks until we have some nice showers, then leafs out and produces these delicate flowers.
The photo would have been better if the sky had been blue.....

Some of the racquetball ladies...I'm on the right end....it was pretty windy, our hair doesn't usually stick up like that, ha ha
Geez, that shirt makes me look like a cow. 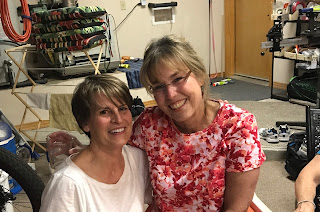 Barb is one of my favorite people...so sweet.
We're in a garage playing ping pong, as explanation of the background.

This is my long weekend....I'm off today and Monday.  I have a few projects to do.......take my notes from last class and put in a binder (which will have to be HUGE to fit it all).  Maybe find a new desk lamp, as the one I have sucks.  I prefer a more diffuse light source than the harsh glaring light of my current one.  I need to clean up my desk, which I have totally ignored since class ended.  I have a framed print that I need to hang, reorganize the closet....well, there's lots to do.  I probably won't get it all done, but hope to put a nice dent in it.

Our weather has been truly crazy....wintery temps in the morning, spring wind mid-day, with the promise of summer in the temps in the afternoon.  We've also had rain, which has greened up the west mesa...it's really amazing to look across the valley to see all of that green.

Make sure you read the last line carefully....
Please ~ redirect me.
Sounds like a comedy routine.

A Belated Happy Mother's Day to all of you Mom's out there.  Romeo asked me what I wanted, and I gave him the answer any self-respecting Mom gives: take me out to dinner (so that I don't have to cook or clean up after).  Let's go to Ruth's Cris.  Yeah, I know it's expensive, but we so rarely go out to eat I didn't care...plus I'd never been, but Romeo has, and Albuquerque just recently had a few open up.  It was very good, but I probably won't ever need to go again.  There's a great restaurant in Santa Fe called Geronimo's that is just as good (5 star rated), not as expensive, and has a really wonderful atmosphere that I enjoy.  All in all, a wonderful Mother's Day....the boys sent me Amazon gift cards, so I can shop for books or movies...lots of options. 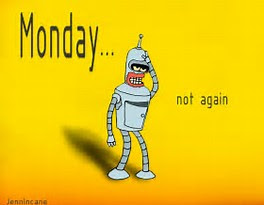 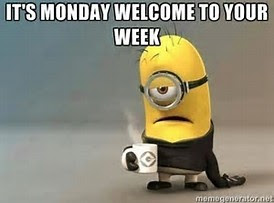 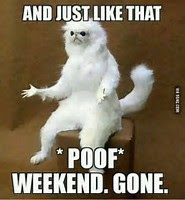 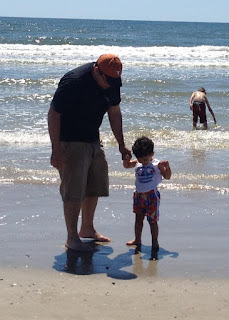 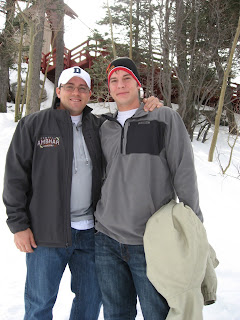 Well life in our household has somewhat adjusted to Son #2 moving to Round Rock/Austin.  We've settled in, but haven't yet had the time to convert the third bedroom to Romeo's office/guest room.  I did check out beds at Costco, and I saw a contender....nice enough, but not terrible expensive.  This way we have something for two people to sleep on, and if necessary, an inflatable as well (which I hate ~ I've slept on it before and always felt I was about to slip off).  The daybed that Romeo made & carved is so beautiful that I hate to get rid of it, but we must in order to fit the full size bed I intend to put in there.  I'm still trying to figure out what could be done with it ~ maybe I can take the back of it off and use it for a headboard.  I'll have to do some measuring.

Work has been going OK.  I still enjoy working there, but also have some issues with *Linda, who is, at times, an obnoxious blow hard.  Although I admire the confidence she apparently has in abundance, I find her ..... well, obnoxious.  Last week I met with the OM and told her that yes, I'm intimidated by her and don't feel comfortable confronting her.  This is in response to scheduling for the Dr., which she is supposed to be responsible for, but has pushed that responsibility to me, even though I already have so much to do, that I don't feel I have the time to manage - not to mention that it's not up to her.  Yeah, I'm not comfortable with confrontation.  I'm not clever with words.  I'm more of a "you're fly is open" instead of "you need to check your clothing for errors" kind of person.  She voiced her displeasure over a schedule change the Doc asked me to do, and the best I could do was say "I think you're over-reacting".

The exams went well....I did better on the final than I did on the other two exams.  I also managed to get 20 out of 25 points on the extra credit, which brought me up to an A for a final grade.  I'm convinced the extra credit pushed a solid B to the A, so I'm glad I put the effort into it!  I'm looking forward to the 4 week break between now and the start of the summer semester.

Tonight is our semi-annual racquetball party....we eat, we drink, we play ping pong!  I'm taking "fiesta salad" which is really delicious, and Denise always brings her famous stir fried rice dish.  Guess I better quit blathering and get ready for the day.

The beginning and the end.......of a semester 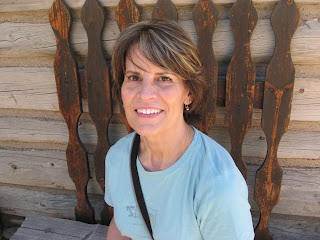 Coming to the end of the semester is always crazy.  There are final exams, sometimes they're compreshensive (everything from the 16 weeks), sometimes not.  I haven't had a comprehensive final in awhile.  I think the last one was statistics.  Whatever the reason, I'm glad I don't have a comprehensive final in my current class....I have 3 notebooks full of print outs, readings and notes.  In this class we also have the option of writing a final paper for extra credit.  I always take the extra credit offer unless I already KNOW I have an A.  If there's any doubt, I take it.  As I haven't taken the final exam yet ~ and probably won't until Monday ~ I will spend some time writing the extra credit option.  Hedge my bets and hope for the best.  Ha ha

My favorite part of a semester is the beginning and the end.  In the beginning, you get a feel for what the subject matter will be (and sometimes I really didn't know for sure until it starts, although some classes are obvious, like math or chemistry...anthropology classes are sometimes ambiguously worded, like my current one, like Human Behavioral Ecology), and I can decide to continue with it or drop it (like I did the history class).  The end means you've almost finished and will be rewarded after with some down time.  I have 4 weeks off between the end of this class and the start of the summer semester.  I have two classes I've registered for, but I've been doing some contemplation about taking on so much during a time when Romeo is off, although he has 3 tests he needs to complete this summer to obtain his final licensing.  Guess we'll have a little chat about that this weekend, and see what he thinks.

I also want to talk to him about the possibility of adopting another dog.  Sioux seems fairly content with being the only four legged furry member.....but that doesn't mean she wouldn't enjoy having another friend during the day when we're at work.  The only thing I need to keep in mind is that Romeo may not want to invest that much time and energy to adding another pet to the mix.  Last time we added another dog, it took about 4 weeks before everyone felt comfortable.  So, I guess I'll add that into the discussion.

Now that I have graduated from college ~ 2 whole years ago! ~ I don't pro-crastinate as much as I used to.  And some things simply don... 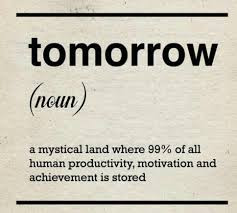