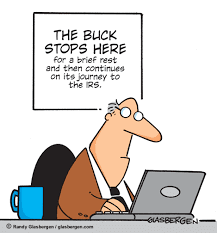 Romeo did the taxes, and I mailed them off.....it's a good system.  He once mentioned that "you should learn how to do this in the event I can't" ~ my reply "Honey, if you aren't here, or can't do them, I'll find someone to do them....I don't do taxes".  He has never mentioned it to me since then.  Problem solved.  There are just some things I won't do, lol. 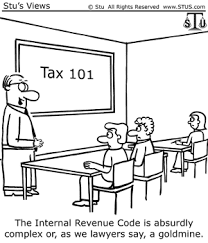 And this is why....(google images)

I realize that Turbo Tax is so simple to use that a monkey could probably do it, but I still won't do taxes, and that's that.

Otherwise, life has been rolling along.  I've been at my new job for 2 months now, and feel like I'm fitting in and learning the ropes.  There is a wonderful walking/biking path right outside the back door, and either direction leads to a nice little park with picnic tables, benches, etc.  I've been walking at lunch, but I've already learned that walking with a black shirt on makes me too sweaty, so I have to dress for the walk before I go to work....or bring something to change into so I don't get too hot.  My co-workers probably wouldn't appreciate sweaty body odor for the afternoon...and I don't really like that either!

I have my research paper due in a couple of weeks, so I might be absent until after May 9th.  I have simply got to get it together.

I hope all of you have a wonderful weekend!
Love, 365

Of spring, migraines and research papers...... 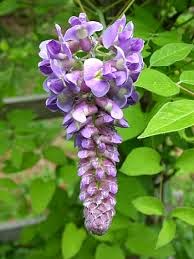 I was going to post my own photo, but today my computer is being cranky, so I had to download this one from Google.  Stupid, stupid computer.

It has been a great spring so far, with only a few mega-windy days.  My wisteria looks like a fairy tale, and the back yard smells amazing.  I love the scent, but discovered a few years ago, that wisteria does not do well as a cut flower.  The blooms will wither right up after a few hours in a vase.  I just have to open the windows or door to enjoy the scent if we're inside.   In Japan, they go totally batshit crazy for flowers.  This is one example: 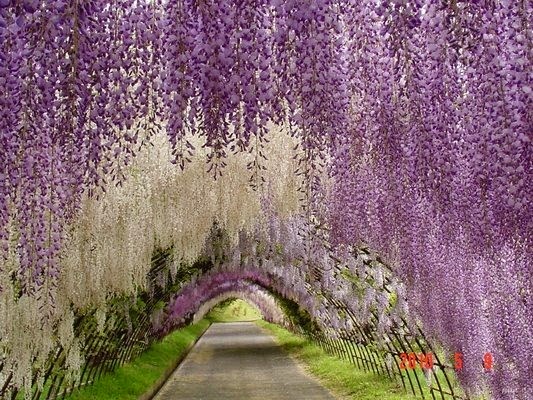 Actually, I'm not sure this tunnel is in Japan.  But wow, I would imagine the scent would be a tad overpowering in one of these.  Beautiful, though.

Yesterday, I had a migraine, so I took some imitrex (a friend gave me some to try...yeah, I know) and rested for an hour, and feeling better I took off for the "special collections" library near downtown Abq.  I felt ok.  But soon after arriving, I felt it coming back on.  I thought I would try "relaxing" and perhaps it would go away.  Silly me.  Once I discovered the report I needed, I figured I would have to come back another day, and drove home.  With the a/c on full blast.  I did ok until I reached the street I normally take, then had to pull over and barf.  This is one of the reasons I never leave home without a good quality plastic bag.  Never know when you might need to barf your guts out, ha ha, although not at all funny.  So, apparently imitrex doesn't really do it for me.  I only felt OK for about 2 hours, and it came roaring back with a vengance.  I shall have to make a Dr's appointment to get some better drugs, lol.  I don't have chronic migraines, which the literature defines as 15 or more days a month.  I swear, I would have to quit work and file for a disability if I had them that often. Ugh.

So, I began to wonder if there is something in libraries that makes me feel sick.  No, seriously.  It's happened more than 5 times.  Maybe there is a dust, or some other factor that gets to me in the library, which means if I go, I'll have to hurry.  So, no pressure....one of the things that also gives me migraines.  Sheesh.

I was most grateful for all my facebook friends who were so kind after the death of my dog.  I have wavered all week thinking maybe we shouldn't wait too long to go to the humane society and adopt one.  One minute I'm ready to go, another, I'm thinking it might be a year or so.  Guess I'll see how I feel in a month.  I don't really want to rush into it.  I miss him so much.  He was such a wonderful dog. 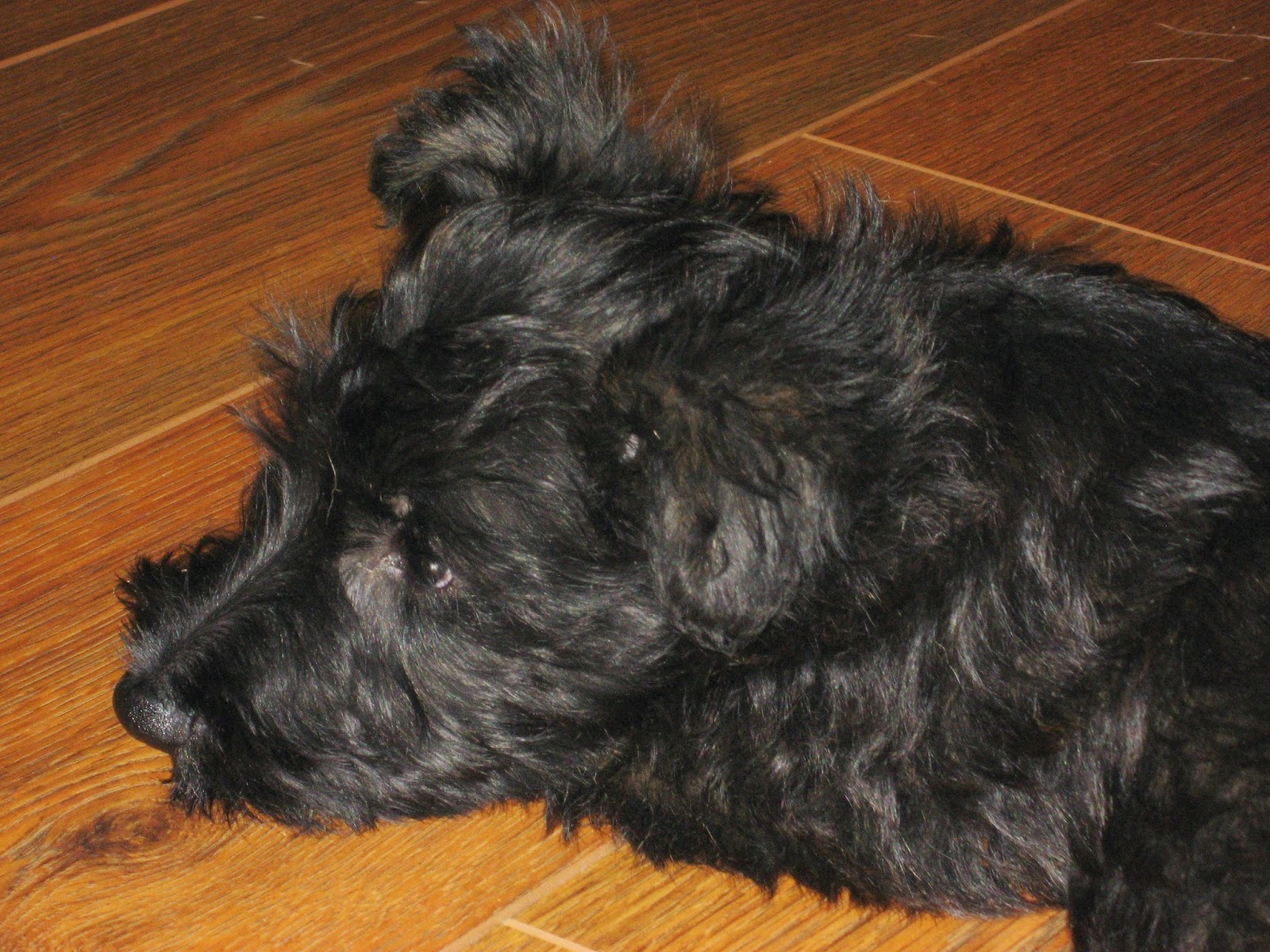 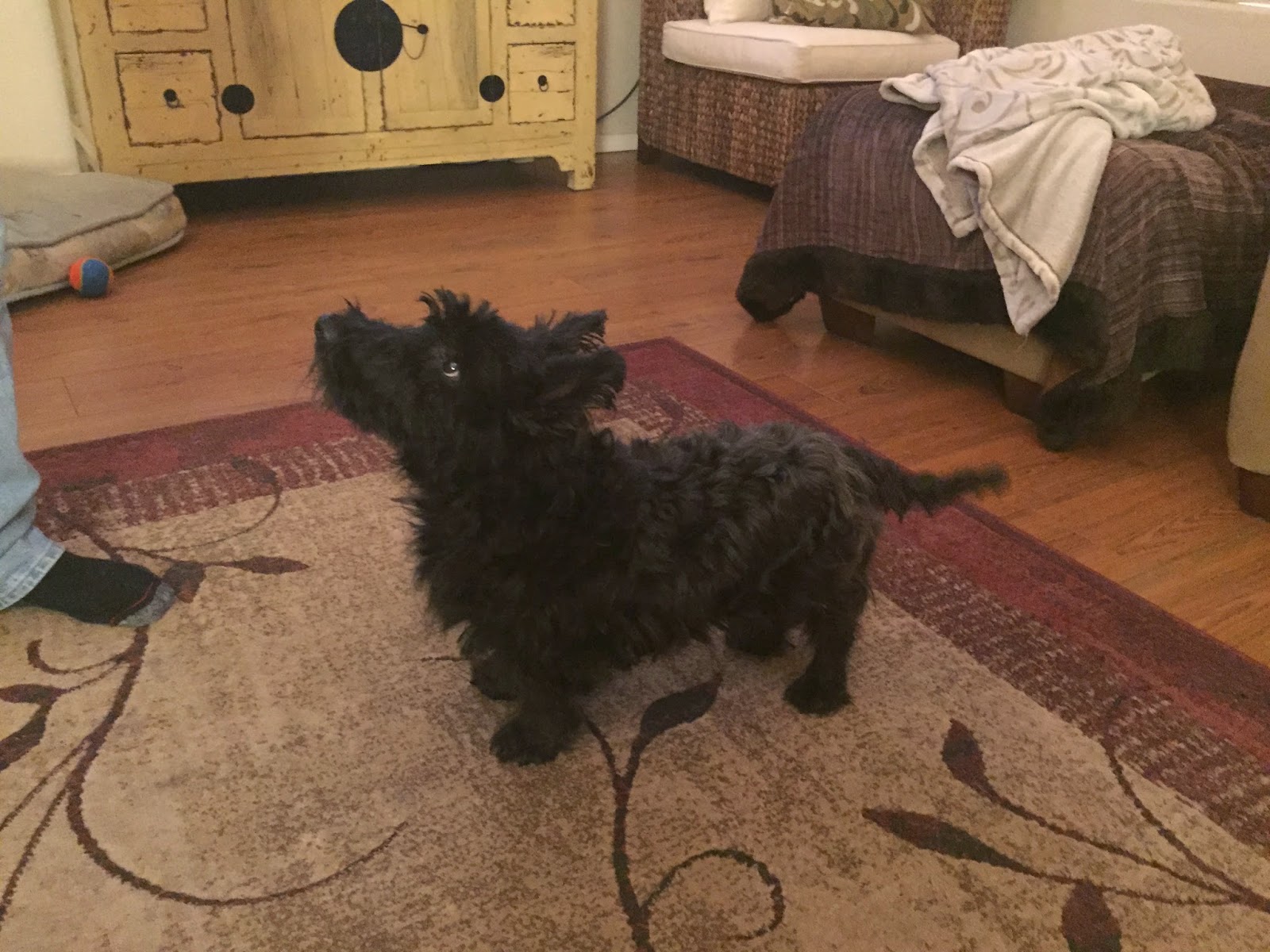 Dogs.....they come into your life with joy & irritation (stop chewing my shoes!...oh, I just stepped in crap......quick, lets go out side before you pee on my rug again!...omg, look how cute they are.....doncha just love puppy breath?).  Then they become your little hairy four legged kids.  Always happy to see you when you come home, happy to go for a walk in any weather, love to jump up on the bed and snuggle.   Brodie (like all of our dogs) was special.  I picked him out of a litter of 5 puppies, and it was love at first site.  Some Scottish Terriers can be snippy, but Brodie was very sweet, even at the groomers.

Ok, I loved this dog with all my heart.  And now my heart is broken, and I cannot quit crying.

Stupid pancreatitis.  After the initial diagnosis, he lost his fight after 4 months.  He was only 8 years old.  We should have had him for 4 to 6 more years.  He was ok on Thursday, but when Romeo got up on Friday morning, it was obvious Brodie had a tough night.  He took the day off so that he could take Brodie to the vet, and I went off to work, worrying.

Then there was the fight with the vet's office.  Romeo packed him up and drove to their office, only to be turned away because "one vet called in sick, and we are just too busy".  Romeo called and told me what happened, and I called them right away....the result being that at first they said to bring him at 4:30, and when I said he might not live that long, they relented (relented for christs sake).  Romeo took him back in around 11:00 and they hooked him up to an i.v.  Initailly the vet thought Brodie had already passed.  He did not improve.  We went in together and had him euthanized, because by then it was obvious that his little body was shutting down.

I miss him.  I rail against the disease, hating it.  Wishing I had just one more day with my beautiful, loving little boy who gave us so much joy.

We have a secret, you and I
that no one else shall know,
for who but I can see you lie
each night in fire glow?
And who but I can reach my hand
before we go to bed
and feel the living warmth of you
and touch your silken head?
And only I walk woodland paths
and see ahead of me,
your small form racing with the wind
so young again, and free.
And only I can see you swim
in every brook I pass
and when I call, no one but I
can see the bending grass.
~Author Unknown 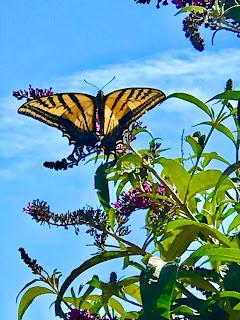