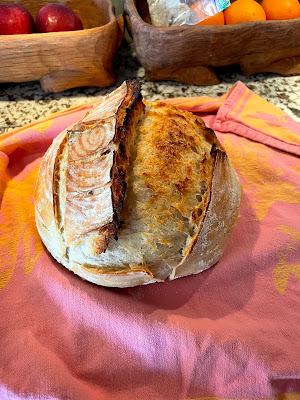 Today's bread.  So many bakers strive for the "ear" (the part that is sticking up), and I can't stand them, and of course, that means I get them every time without trying. It tastes good, so there's that.  The funny thing is, that peak is rather sharp and will cut through the gallon size bag I store my bread in (which I have to do or it will dry out completely in 12 hours).

This past Friday someone (& believe me, I'm going to find out who) scheduled the dental IT guys to come and set up a new intra-oral camera starting at 2 pm.  Which is when our Friday work day ends.  My coworker and the doctor were discussing who was staying late, and she told him she couldn't.  What's funny is that we were talking about it before this chance meeting, and I told her I would be willing to stay until 4 or 5, but it would cost them $400.  Her eyes widened and I said, hey, my time off is precious and expensive.  So, unbeknown to me, she told him that I would stay for a price, and he immediately said, no.  Fine.  Then he left without saying anything to me ~ chicken shit b******.  I was livid.  The only thing that kept me from blowing my lid was that the guy was done by 2 anyway.  I don't know who scheduled this set-up, but we are having words next week.

Our dog is doing better ~ I know I keep saying that.  We did go back to the vet, and the result from that was that she is apparently now allergic to poultry/bird proteins.  So, we were making things worse by giving her boiled chicken and rice.  We were given a bag of very costly prescription dog food (with hydrolysed protein).  Which the dog is refusing to eat.  She has gone from eating 3x daily to one (if we're lucky).  We have added the tiniest bit of bacon fat to it, and she will condescend to eat it once a day ~ probably only because she's starving.  I suppose it's a good thing she had become rather pudgy and had some weight to lose.  The household stress levels are like a roller coaster ~ down to the depths when it's been 24 hours since she's eaten, to the highs of watching her eat, even if it's not that much.    I know I've thought how lucky we all are that dogs can't speak English, but when they're sick, I sure wish they could tell us what the heck is going on.

It's Son #2's birthday today ~ we called and he said he was doing laundry and cleaning his place ~ fun times, eh?  He's having to look for apartments right now, which doesn't make him happy.  I told him it's just part of it.  I moved many more times than he has, but that knowledge didn't seem to make much of an impression. :D

I hope all of you have a wonderful week!

Happy Mother's Day to all the Mom's!

I hope that all of you Mom's out there are celebrated for all you've given to your families!  Sioux update: she is back on the ster... 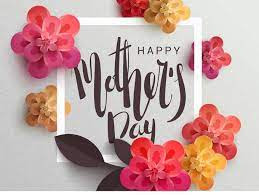