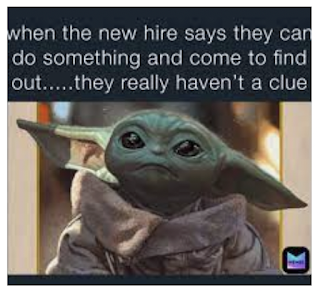 I picked this meme because I love little Grogu (the child on The Mandelorian).  Look at that ugly/cute face....

Thursday was OK, but I had to stay an hour late waiting for the doc to finish the fillings on a guy who has Parkinson's.  Poor guy, he can hardly hold still for the fillings to be done.  Took nearly 2 hours.

Today I found out that there has been talk about the new girl.  And she is a girl, she's only 26.  She seems very nice, doesn't hesitate to answer the phone or greet patients.  One of the docs came up to us today to discuss it with us.  And Ms Loud immediately goes into the list of undesirable behaviors ~ she said she isn't very motivated, and she's on her phone a lot.  I mentioned that she might not feel comfortable jumping in, especially after we told her not to post any patient payments (which has to do with a complicated switch over from two docs co-owning the business, to one owner).  You know, maybe she's feeling a little less confident after Ms Loud goes to her and says "don't post any patient payments until we're able to get you up to speed on making sure we credit the right doctor".  Which sounds reasonable until you hear the tone she says it in.  I mentioned this, and also mentioned that maybe - just maybe - 4 days isn't enough to make the determination?  Ugh.

After the doc left, I said that it was kind of the pot calling the kettle black about the phone thing, since the person who made the comment is on her phone all the time.  I don't know.  Maybe I'm just a sucker.  Maybe I'm too compassionate (yeah, it's not a good thing if you know me, I cry at commercials).  And we all are on our cell phones.  Ms Loud is on hers even more than the person who made the comment.

Well, it's all over now until Tuesday, so we'll see how it goes.  In a few short months it won't matter to me anyway.

Hurray for the weekend! 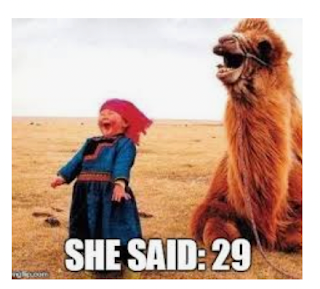